The Expanse Content Pack for Cortex XSOAR provides full coverage of the Expander and Behavior product capabilities from Expanse to allow SOCs to automate the defense of their company’s attack surface.

The integrations in this pack enable fetching and mirroring of Expanse issues into Cortex XSOAR incidents, and ingestion of indicators (IPs, domains, and certificates) that refer to the corporate network perimeter as discovered by Expanse.

Through a powerful set of playbooks, analysts can correlate the discovered information with data provided from internal security systems (such as Palo Alto Networks Cortex Data Lake, Prisma Cloud and Panorama, Active Directory, Splunk SIEM, etc.) to help pinpoint the correct owners of the assets and automate remediation.

The first phase of the playbook is the Enrichment phase. The playbook tries to enrich the data (such as IP addresses, Domains, Certificates) associated with this incident. The playbook uses the enrichment commands for these indicator types to obtain as much context as possible from the Expanse integration and from other integrations that can provide reputation and enrichment for those assets.

The next phase is the Validation phase. This phase collects information to determine:

This is achieved by correlating the IP address and FQDN that are found with the information available in other products as follows:

A report is then generated and appears in the Evidence Board with all of the captured information. 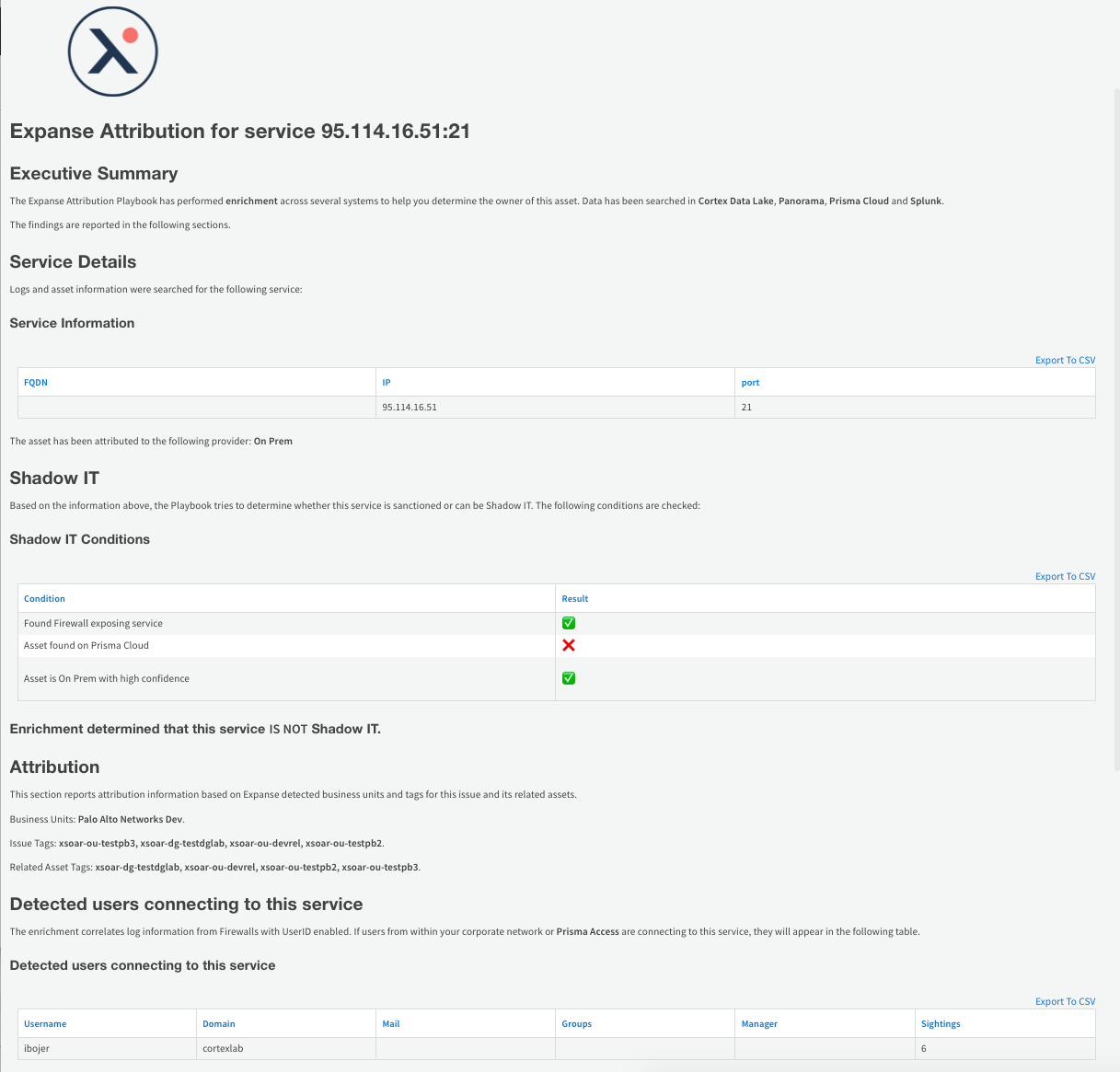 The final phase is the Response phase. Depending on the issue type, several remediation actions are automatically and manually performed. 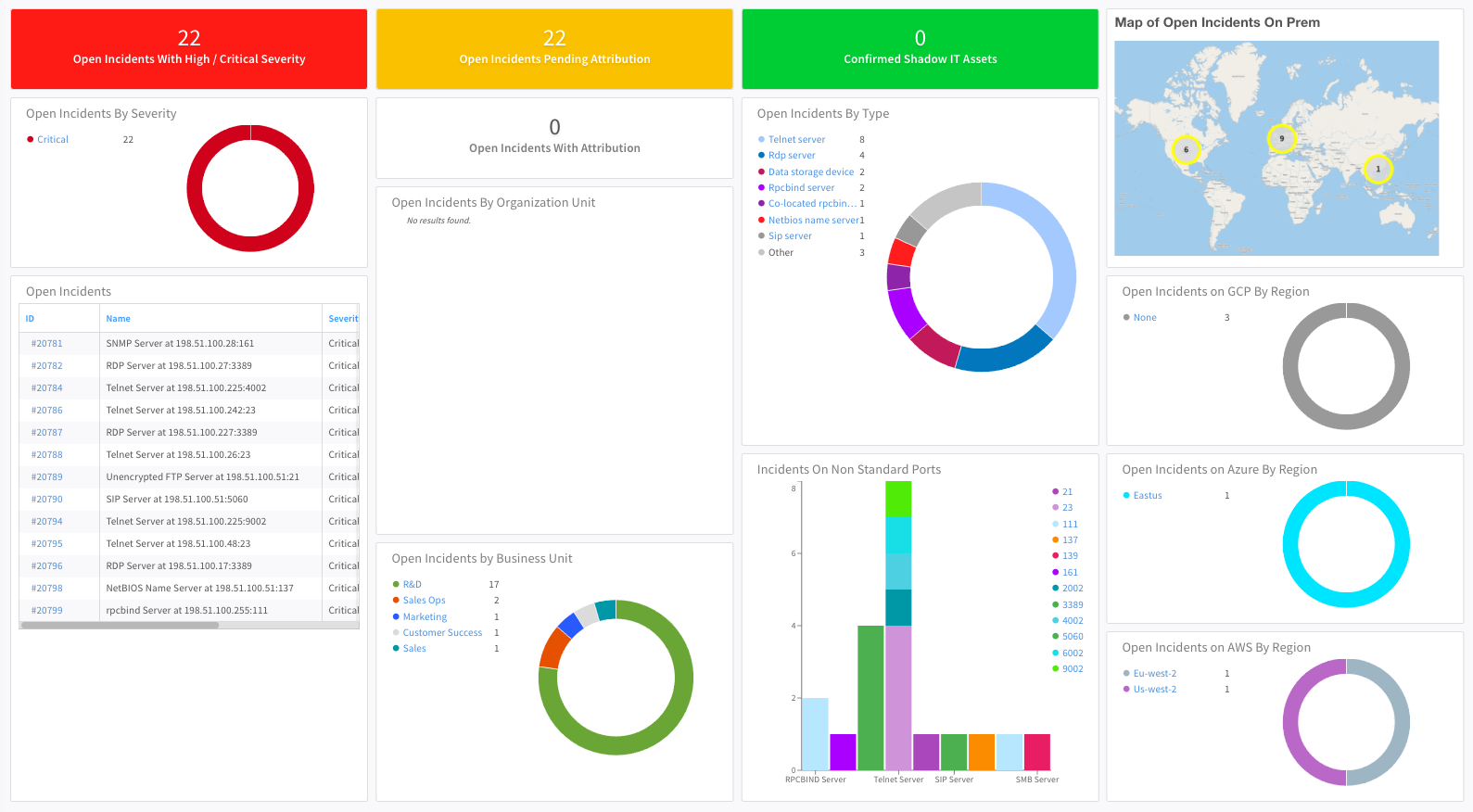 There are 2 layouts in this pack.

There are 3 tabs in this layout.

There are several tabs in this layout. The following describes the information in the Incident Info and Expanse Evidence tabs. 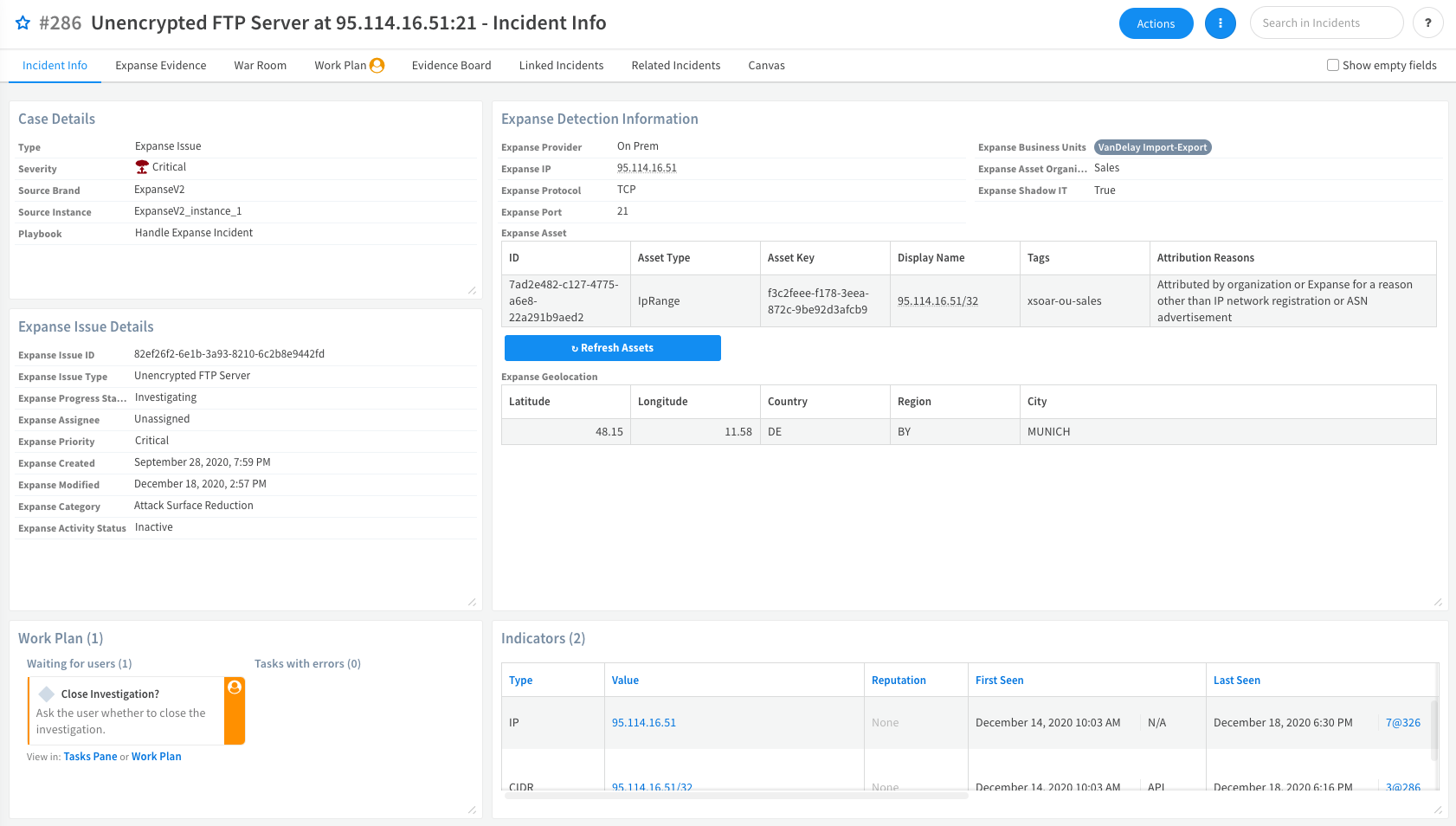 There are 8 playbooks in this pack.

Sub-playbook for Handle Expanse Incident playbooks. This playbook is meant to be used as a sub-playbook to enrich Public Cloud Assets (i.e., IP addresses and FQDNs) by:

Sub-playbook for the Expanse Enrich Cloud Assets sub-playbook. This playbook is used to find the corresponding Public Cloud Region (i.e., AWS us-east-1) and Service (i.e., AWS EC2) for a provided IP address. It works by correlating the provided IP address with the IP Range Indicators (CIDRs) that can be collected from Public Cloud feeds (i.e., AWS Feed) in XSOAR. CIDR Indicators must be tagged properly using the corresponding tags (i.e., AWS for AWS Feed): tags can be configured in the Feed Integrations and must match the ones provided in the inputs of this playbook. Correlation is done based on the longest match (i.e., smaller CIDR such as /20 range wins over a bigger one such as /16).

This is the main playbook for handling Expanse incidents.

Shorter version of Handle Expanse Incident playbook with only the Attribution part.

A generic playbook for handling Xpanse issues. The logic behind this playbook is working with an internal exclusions list which will help the analyst to get a decision or, if configured, close incidents automatically.

There are 25 Widgets in this pack.

Configure an instance of the Expanse V2 integration. At a minimum, you only need to configure the API key.

You do not need to enable any additional integrations, but if you don't have Panorama, Cortex Data Lake, Splunk with firewall logs, or Prisma Cloud, the enrichment and validation phases of the playbook will not provide good results.

The playbooks will work with the default settings out of the box. If you want to modify any of the default setting, see Handle Expanse Incident for a description of the playbook inputs. In case you want to use the generic playbook instead of the main playbook, please configure the instance without any classifier and choose Xpanse Issue - Generic as the incident type: 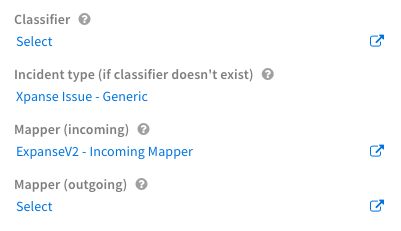