The Cortex Xpanse pack for Cortex XSOAR provides full coverage of the Expanse Expander and Behavior product capabilities to allow SOCs to automate the defense of their company's attack surface. The integrations included in the pack enable fetching and mirroring of Expanse Issues into Cortex XSOAR incidents, and ingestion of indicators (IPs, domains, and certificates) referring to the corporate network perimeter as discovered by Expanse, a Palo Alto Networks company.

Note: This Pack, as well as its previously named Expanse v2 Integration, were renamed to Cortex Xpanse. All other content items are still named the same.

How to use this pack? 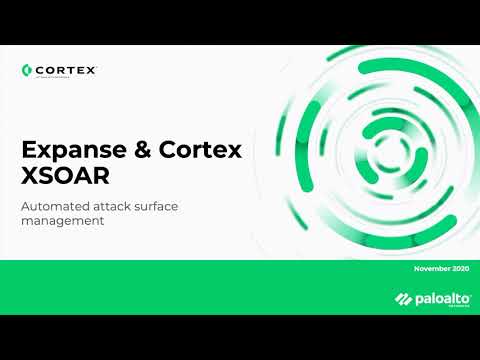 Content packs are licensed by the Publisher identified above and subject to the Publisher’s own licensing terms. Palo Alto Networks is not liable for and does not warrant or support any content pack produced by a third-party Publisher, whether or not such packs are designated as “Palo Alto Networks-certified” or otherwise. For more information, see the Marketplace documentation.
Playbooks
Classifiers
Automations
Integrations
Incident Fields
Indicator Fields
Incident Types
Layouts
Widgets
Dashboards
Required Content Packs (11)
Optional Content Packs (12)
1.10.13 - 2902879 (May 11, 2022)

Minor edit in the README file regarding playbook inputs.