Release notes files help to keep track of the changes made for a specific content entity like an integration or a playbook.

To generate a release notes markdown file, first commit the changes to your branch and then run the following command provided by the demisto-sdk:

Please note: Changes which have not been committed will not be detected automatically by the update-release-notes command.

This command will bump the currentVersion found in pack_metadata.json file automatically according to the update version (as denoted by the -u flag) for you.

Generally, you will use the command when you are ready to merge and expect no other changes. If you need to make additional changes after running the command, you will need to remove the -u argument. This will update the release notes file for you to fill out.

For more detailed information regarding the update-release-notes command in the demisto-sdk, please refer to the documentation found here.

The release notes file will be generated for you and is found under the ReleaseNotes folder within each pack. If this folder does not already exist, one will be created for you.

The names for the files generated should not be changed as this will cause potential issues in the future.

After running the demisto-sdk command mentioned above, the release notes file which was generated will contain a section for each entity changed in the pack as well as a placeholder (%%UPDATE_RN%%). This placeholder should be replaced with a line describing what was changed for that specific entity.

For example, if changes were detected in the Cortex XDR pack for the items IncidentFields, Integrations, and Playbooks; the following would be created:

One should specify in the corresponding release notes file the following changes:

Pretend you need this release note to do your work. A bad RN can easily lead to a CS ticket.

- **Slack v2**
- Fixed an issue where mirrored investigations contained mismatched user names.
- Added the **reporter** and **reporter email** labels to incidents that are created by direct messages.
- **CrowdStrike Falcon**
Fixed an issue with ***fetch incidents***, which caused incident duplication.
- **IBM QRadar**
Fixed an issue in which the ***qradar-delete-reference-set-value*** command failed to delete reference sets with the "\" character in their names.
- **GitHub**
Improved implementation of the default value for the *fetch_time* parameter.

Note: Use these if the change has no visible impact on the user, but please try to refrain from using these if possible!

However, you may encounter a scenario where certain changes are not necessary to document in the release notes. To solve this, you may comment out the entries by using the following syntax:

demisto-sdk includes the doc-review command to assist with the doc review process. It will check the spelling of the release notes and provide guidance if you are not using one of our standardized templates. Example usage:

More info is available at the demisto-sdk doc-review command README.

In some cases, a new version is introduced which breaks backward compatibility (although we try to avoid it as much as possible, sometimes it is needed). From XSOAR version 6.5 and above, there is a support to mark a new version as a breaking changes version mechanism.

Marking a version as a breaking changes version will pop up a screen to the customer upon installation: 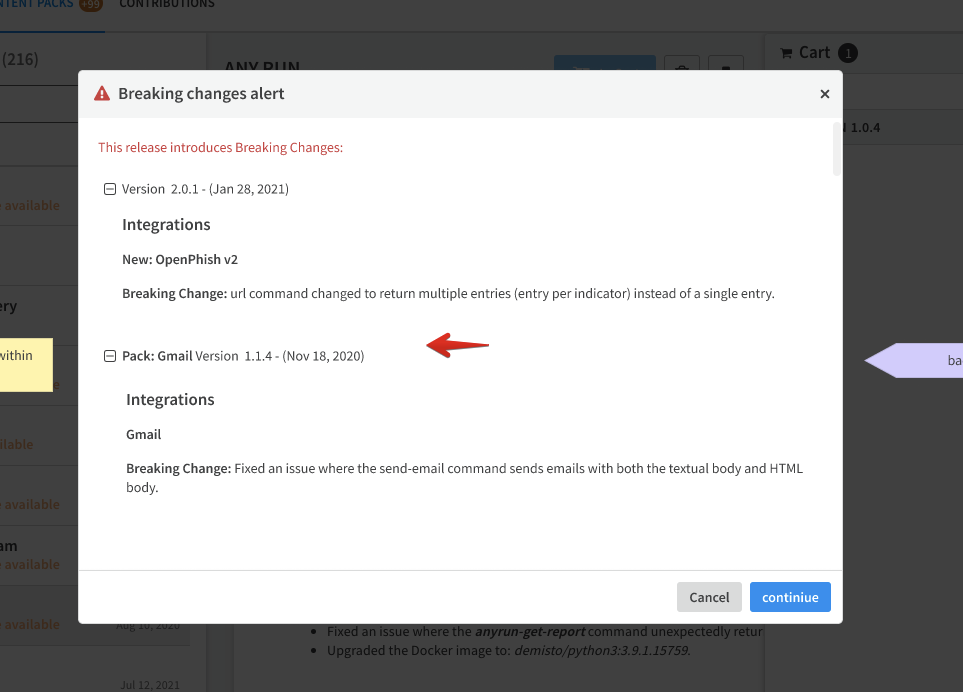 How to indicate a new version as a breaking changes version?#

In order to specify the new introduced version as breaking changes, the demisto-sdk update-release-notes command can be run with the -bc flag, for example:

Adding the -bc flag will:

I excluded an item from the release notes file, but it won't pass validation.#

Make sure to remove the %%UPDATE_RN%% from the generated file and leave the other generated items intact.

When I run the update-release-notes command, it does not find any of my changes.#

First make sure you have committed your files. Next check to see that the type of file you changed requires a release notes entry. TestPlaybooks, Images, README's and TestData don't require release notes.

I ran the command and filled out the release notes correctly, but it still fails validation.#

On rare occasions it's possible that the pack you are working on has already had the version bumped. To resolve this, delete the generated release notes Markdown (*.md) file and restore the currentVersion in the pack_metadata.json file to it's original version. Next, pull from the master branch. Lastly, run the update-release-notes command as you previously had done.

I added a new pack. Do I need release notes?#

New packs do not require release notes. The build process will automatically create the initial release notes for you.