Similar to Python, PowerShell Integrations and Automations run in a Docker container. All of the Demisto Docker images that support PowerShell are named with a prefix of either demisto/powershell or demisto/pwsh. If you need to create a new image follow the instructions at the demisto/dockerfiles project: https://github.com/demisto/dockerfiles.

We use PSScriptAnalyzer for linting and static code analysis of PowerShell Integrations/Automations. If you receive a false positive from the Analyzer, you can suppress the rule by decorating the function/script with SuppressMessageAttribute. Make sure to specify a Justification in the attribute why the suppression was necessary. An example usage of suppression can be seen here. PSScriptAnalyzer suppression documentation is available here.

For running the unit tests we use Pester.

Make sure your code imports CommonServerPowerShell.ps1. The import should be done by adding the following line to the start of the file:

When the Integration/Automation code is unified by demisto-sdk for deployment to the Server the import line is automatically removed.

Use Main in Integration/Automation Code#

When writing unit tests you will import the Integration/Automation file from the *.Tests.ps1 file. Thus, there is need to make sure that the file is written in such a way that when importing, it will not execute. This can be done with a simple Main function which is called depending on how the file was executed. When the Integration/Automation script is imported by the unit test file we will not execute the Main function. Adding the following code will ensure the script is not run when imported by the unit tests:

# Execute Main when not in Tests
if ($MyInvocation.ScriptName -notlike "*.Tests.ps1") {
Main
}

All unit tests should be written in a separate PowerShell file named: <IntegrationFileName>.Tests.ps1 (Pester Unit Testing naming convention). The unit test file should import the Integration/Automation code file by adding the following line at the start of the file:

Group related unit tests using the Describe block. Use Context for grouping tests that use the same mock logic. Write your tests using the It command. For more details see the Pester Docs. Example unit tests can be seen at: VerifyJSON.

Pester supports mocking PowerShell functions. You can mock any function defined in CommonServerPowerShell.ps1 and functions included in standard PowerShell and imported modules. Pester doesn't support mocking object methods. This includes methods of the $demisto object. You can however modify the $demisto object properties in a test. For example you can set the ContextArgs property to control the return of $demisto.Args() method. Example code:

Tip: Use the command line params --no-pwsh-analyze and --no-pwsh-test to skip either the PSScriptAnalyzer or unit testing. 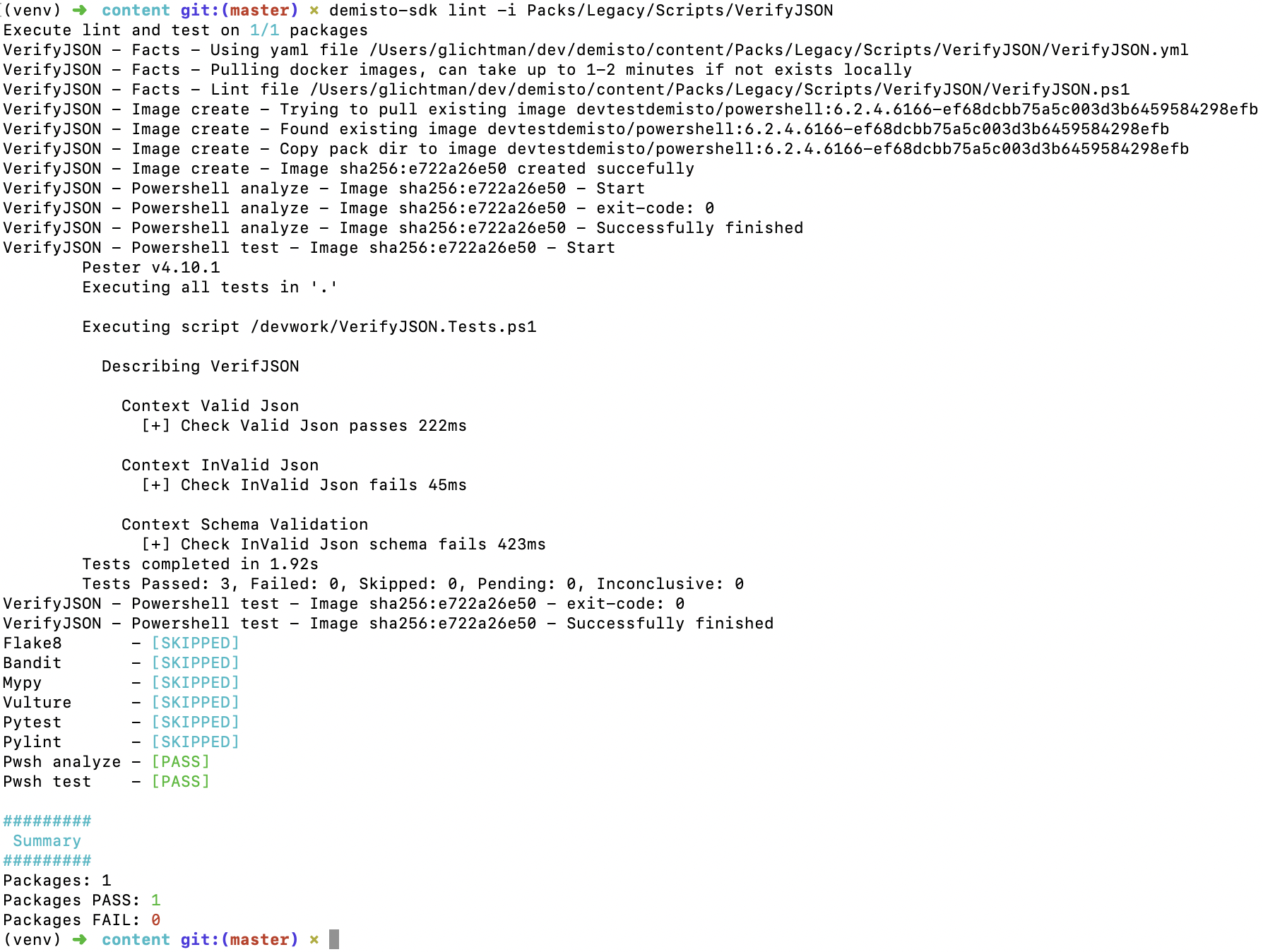 To run unit tests use Pester:

Check the command help on how to specify specific tests to run. 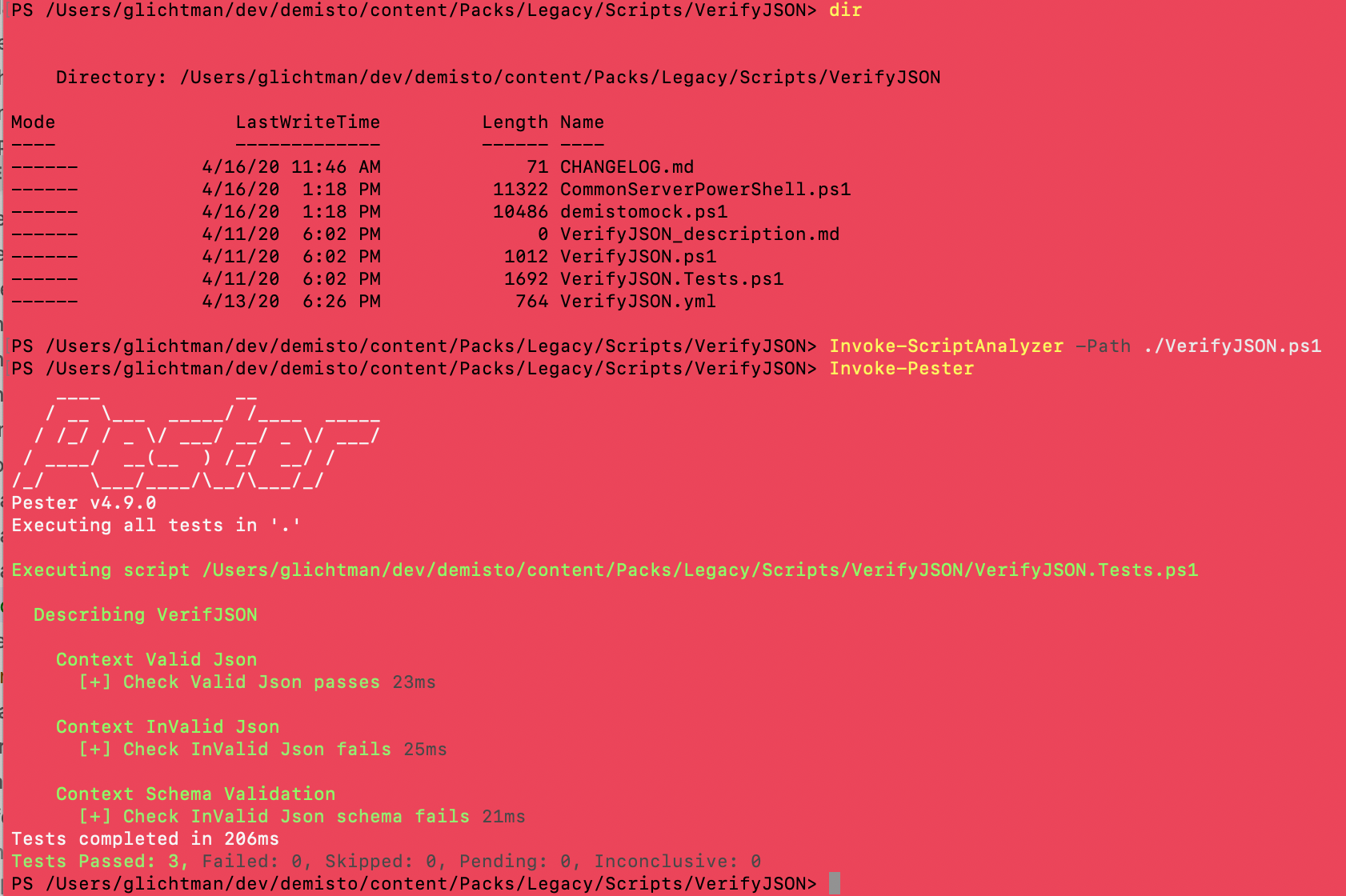 We recommend using VSCode as a PowerShell editor. The PowerShell Extension developed by Microsoft comes with built-in support for PSScriptAnalyzer and Pester unit testing (including Debugging).

Sample output of PSScriptAnalyzer in VS Code alerting about an unused variable: 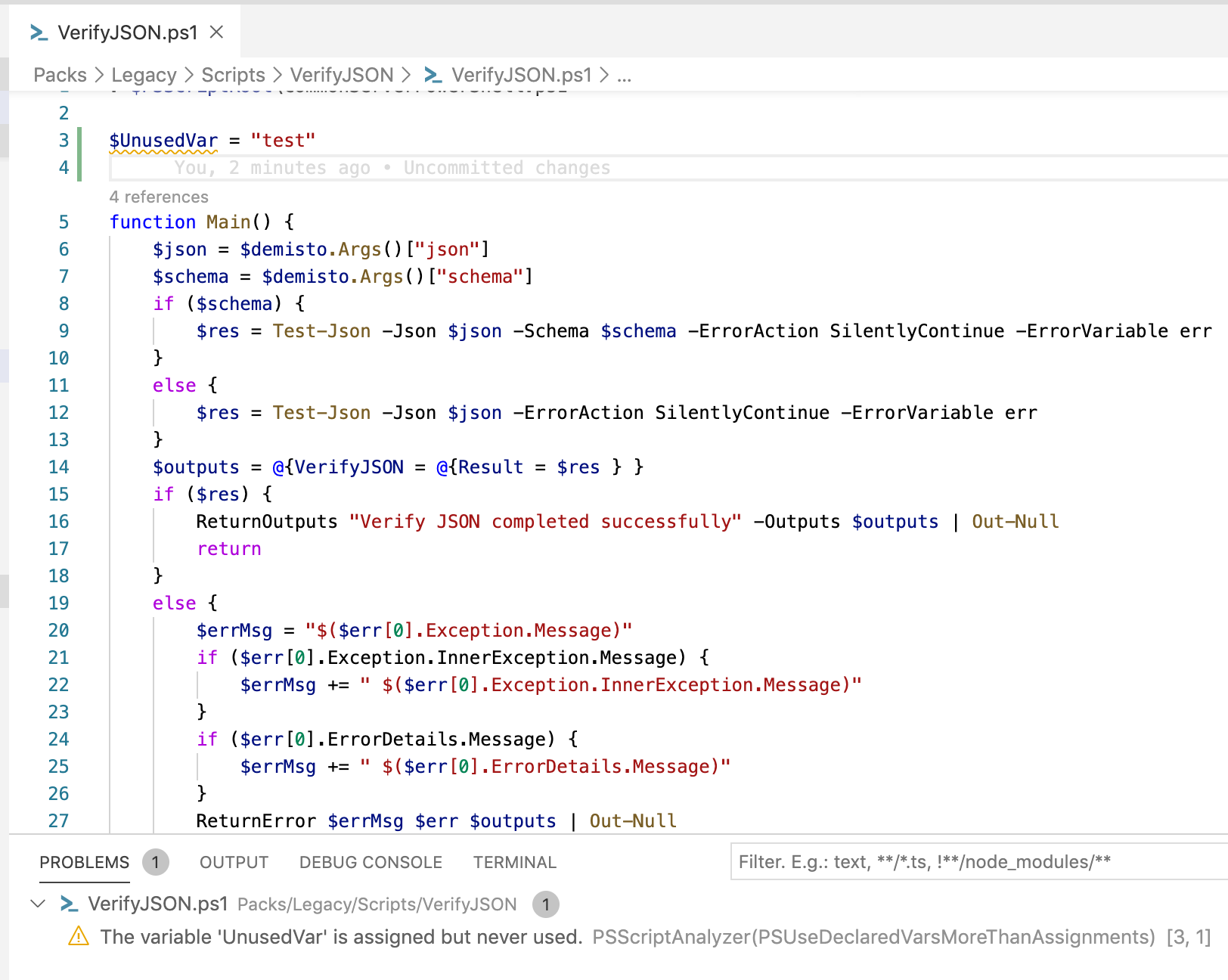